Who was Frances Larrabee? 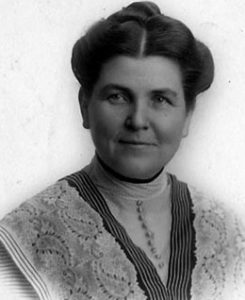 Who was Frances Larrabee?

Some time ago, I began to wonder why our club was named “The Frances Larrabee Garden Club” which brought me to the question, “Who was Francis Larrabee?” I did a bit of research online and browsed through a few historical books and put together this article on the life and times of Frances Larrabee. 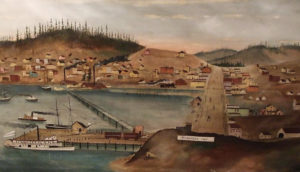 First of all, let me set the scene for Frances’s arrival in Bellingham in 1892. At the time, there were four small towns surrounding Bellingham Bay, Whatcom, Sehome, Bellingham, and Fairhaven. Later in 1903, the four 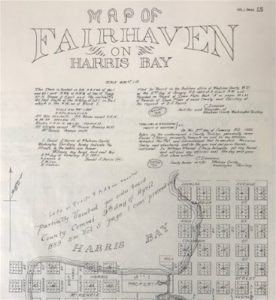 towns would be incorporated into one city named Bellingham. In 1861, “Dirty Dan” Harris had purchased much of the land that is now Fairhaven for $53.75. He platted the land in 1883, giving it the name Fair Haven, derived from the native “see-see-lich-em”, meaning “safe port” or “quiet place”. He later sold the land for $70,000 to Nelson Bennett.

In the 1880’s railroad construction was in full swing to connect Bellingham with Seattle/Tacoma and Canada. 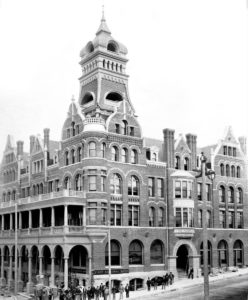 During the speculative frenzy of the 1890s, the grand Fairhaven Hotel was built by the Fairhaven Land Company, a group of investors which included C.X. Larrabee, to entice railroad tycoons to choose Fairhaven as the western terminus of the Great Northern Railroad. Tacoma was chosen instead, but the area continued to grow due to major industries of coal mining, fishing, sawmills and shipyards. Indeed the population grew from 150 in 1889 to 8,000 in 1890 according to the Fairhaven Herald of December 29, 1890. 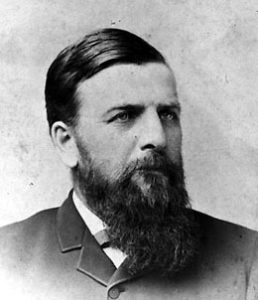 Charles Larrabee was born in Portville, New York, in 1843, and raised in Omro, Wisconsin, Charles William and his family were deserted by their alcoholic father, William Larrabee.  In his early teens, Charles changed his middle name to Xavier, thereby “X-ing” out his father’s name in favor of Xavier, the only name he could think of to go with the “X”.

After obtaining a business degree in school, Charles moved to Montana and first became a banker, then a prospector who struck it rich in the mining industry. After accumulating a considerable fortune from his copper mines and a successful Morgan horse breeding ranch in Montana, Larrabee moved further west to Portland in 1887 where he established business dealings with investor, Nelson Bennett and railroad magnate, James J. Hill. Bennett at that time was promoting development in and around the burgeoning town of Fairhaven on Bellingham Bay. After several visits, C. X. Larrabee relocated to Fairhaven in 1890 and with several investors the Fairhaven Land Company was formed.

Advertisements from the Fairhaven Land Company 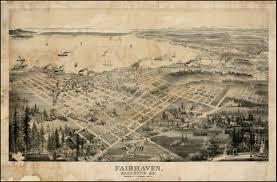 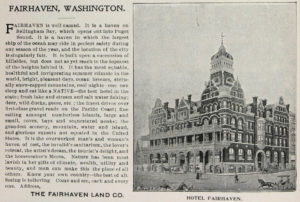 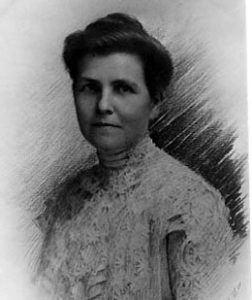 Early in 1890, on a business trip to Boston, Charles met a bright and talented young woman from Missouri, Frances Frazier Payne, She was visiting friends with her mother. Frances was an accomplished pianist who studied music at the Mary Institute in St. Louis and at the New England Conservatory of Music. She then studied in Berlin for a year under Oscar Reif. Charles and Frances couldn’t have been more opposite…she was a cultured woman of diminutive stature, whose family records a rich history in the growth of our nation. Charles was a rugged outdoorsman who had made his fortune in the “Old West,” first as a banker, then a rancher and prospector, and finally as a land developer. 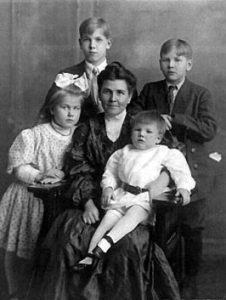 Upon their arrival in Fairhaven, C.X. and Fannie took up residence in the elegant Fairhaven Hotel, built and now owned by Larrabee. Their entire marriage, and the birth of their four children was spent in this grand hotel.  The hotel, however, ultimately failed as a business enterprise due largely to Larrabee’s ban on the serving of alcohol on the premises.  He had blamed alcohol for the desertion of his family by his father when Larrabee was a young boy.

Frances Larrabee made an impressive impact on her new community when she and her husband arrived in Fairhaven, Whatcom County, in August, 1892. Frances immediately recognized a need in the community and acted decisively in helping those who were far less fortunate than she was. Within two months, she was instrumental in the founding of the Bellingham Bay Home for Children, a safe haven for homeless children in the northwestern region of Washington state. The home was incorporated on October 1, 1892. Frances served as founding director and by the end of the year, the Larrabees had contributed a large unoccupied residence and a liberal sum of money to the cause. By the end of January 1893, the residence was home to nine previously wandering children.

But Frances was just getting started with her civic involvement. Dorothy Koert, historian for the St. James Presbyterian Church in Fairhaven, hails Larrabee’s arrival as “an event which was to be of importance to the future of the church.” She goes on by stating that Larrabee “was energetic … and until her death many years later, she was a moving force in the church.” Larrabee was ever present as a decision maker and leader of the church. For example, in April 1917, she was listed as the treasurer of the church, and she suggested that a new church building be constructed. Then, Larrabee donated four lots for the building site, and the contract was signed to construct the new building at a cost of some $5,000.

But Frances’s most significant club-related accomplishment was the leadership role she played in establishing a YWCA in her community. At the turn of the twentieth century, railroad stations and waterfront docks represented places where destitute young women were vulnerable and easy prey. These young women needed the security and assistance offered by an organization such as the YWCA. In 1906, the sudden arrival of victims fleeing from the San Francisco earthquake exacerbated the problem.

Larrabee may have felt a particular affinity for the young destitute women, because around 1890 (before her marriage) her immediate family lost most of its money and for a while she had to support herself by coaching advanced piano students & playing the organ in the largest Methodist Church in St. Louis. She had no money of her own other than what she earned, when she married.

Although the dilemma still existed in the summer of 1914, the institution’s money problems were soon rectified. In Bellingham YWCA: Our Heritage, Randy Roebuck relates a story told to him by Arta Lawrence, who was in attendance at a YWCA board meeting held on July 21, 1914. Frances requested recognition by the chairperson and when acknowledged, Frances stated — as she placed architectural plans for a new building on a table — “speaking of the building, I have here something I’d like to present. Now if these plans meet with the approval of the membership, the Larrabees would like to build it for you.” The cost to build the YWCA was $50,000, which is equal to $1,000,000 today. 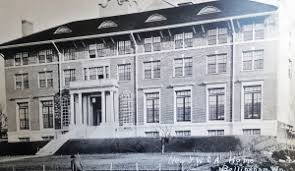 Bellingham YWCA in 1914 and today 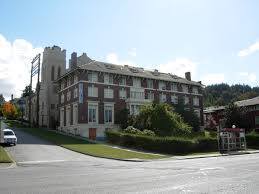 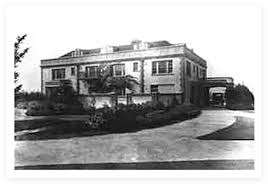 After having lived in the Fairhaven Hotel for 20 years where all four of their children were born, the Larrabees decided to build a family home on property they owned in what is now the Edgemoor neighborhood–a name derived from their description of the land south of their home site as “the moor.”  Noted Seattle architect, Carl Gould, was hired to design what would become a 25-room mansion. C.X. Larrabee, however, died before construction commenced, and Frances took over its supervision. That estate is now known as Lairmont Manor. 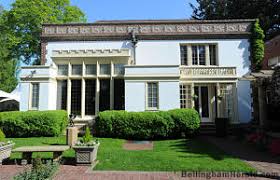 Frances Larrabee’s life had a much fuller meaning than just her active participation in women’s clubs. She demonstrated her leadership capabilities, her progressive spirit, and her commitment to gender equity by the way she lived her personal life. When her husband passed away suddenly in 1914, she took charge of the family and of a considerable fortune embracing several enterprises and spanning properties in Washington, Oregon, and Montana.

This was by no means her introduction to business matters. In a time when men ruled the realm of business, Frances Larrabee was a trustee of a vibrant company. The Larrabee family businesses were incorporated in 1900. The Articles of Incorporation of Pacific Realty Company are dated August 13, 1900, and Frances is listed as one of five trustees; the other four — including her husband — were men. The documents state that the five “are the trustees who shall manage the concerns of the company. 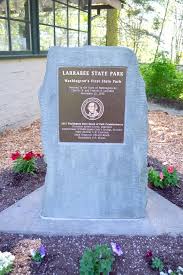 In addition, in 1915, the Larrabee family made a land donation to the fledgling Washington State Parks Commission to create Larrabee State Park. It became the first State park in Washington.  At that time, Frances Larrabee signed the property transfer deed as President of Pacific Realty Company. And, when she and her son Charles donated 1,500 additional acres — some 22 years later — in order to increase the size of the park, Frances Larrabee once again signed the deed as President of Pacific Realty Company.

In addition to the civic commitments noted above, Frances was involved in the leadership of the Bellingham Woman’s Music Club, the Daughters of The American Revolution, and the Twentieth Century Club. In 1920, she was also the first elected president of the local American Legion Auxiliary. In addition, she was “the state chairman of American music for the Washington State Federation of Women’s clubs … a past member of the Civic Music association … a member of the Washington State Historical Society, the Colonial Dames, and of Pro America” (The Bellingham Herald). She also served for 45 years as president of the Women’s Missionary Society for the St. James Presbyterian church.

Frances Payne Larrabee was born on January 15, 1867 and she died on June 11, 1941 at the age of 74 after an illness of one day. Her death was eulogized on the front page of the Bellingham Herald.  Her gifts to the community in her commitment of time, money and personal influence for the betterment of all local citizens were acknowledged and stand as an enduring tribute to the impressive impact of the Larrabee family.

I can imagine the founders of our garden club in the mid 1950’s sitting in a member’s living room discussing the idea of forming a new club and what to name it. Perhaps someone piped up, “Do any of you remember past Edgemoor resident Frances Larrabee?” Then they all reminisced about the many accomplishments this remarkable woman made in our community during her lifetime. Thus, we became known as The Francis Larrabee Garden Club.

Currently the Fairhaven Tower is under construction on the same location as the original Fairhaven Hotel. Perhaps when you pass by, you will contemplate what it was like for a young woman in the 1890’s to arrive our community, during a time when Fairhaven was just being formed. What was it like to live and raise your children for 20 years in the Fairhaven Hotel? I just had a thought…were they the first family to live in a condominium in Bellingham? She really was WAY ahead of her time.

Artistic renditions of Fairhaven looking up Harris Avenue at the Fairhaven Hotel in the early 1900’s and the new Fairhaven Tower, scheduled for completion in 2020 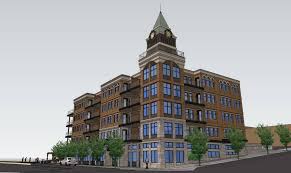 This article was presented to the Frances Larrabee Garden Club on October 24, 2019 and compiled by Sandie Koplowitz from the sources listed below.

Once-majestic Fairhaven Hotel was doomed to finally end up in rubble, and other historical memories of Fairhaven: http://www.skagitriverjournal.com/WA/Whatcom/FairhavenSth/Business/Hotels/FairhavenHotel/FHotel02-1891Memory.html

Fairhaven, a History, by Brian Griffin

100 Years of Challenge and Change: Whatcom Women and the Bellingham YWCA, by Lynn Masland (Author)